A Monumental Tour. Part 5: A Fork in the Road

From Barutana, we headed north to the Montenegrin capital, Podgarica, formerly called Titograd in honour of Marshall Tito whose regime unified Yugoslavia until its collapse in the early 90s. After a quick breakfast in the quiet, tidy streets of the city centre, we were on our way to Niksic. 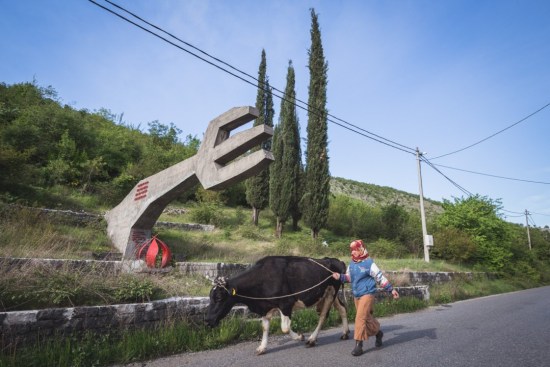 As we drove, there were suddenly two reminders that the structures were were visiting are just a tiny fraction of the monuments that are scattered all across former Yugoslavia. Whilst the best known are mountain-top monoliths dominating the landscape, many are tiny, little more than curious lumps of stone or metal.

The first reminder was at Vranjske Njive where we encountered a fork in the road. Literally, a concrete fork, hanging over the road. Anywhere else it could almost be mistaken as a surreal advert for a restaurant, encouraging tourists to stop for lunch. This being the Balkans, however, the reason for its existence is far more macabre: it marks the place where nine members of the resistance were hanged by the Nazis in 1943. Trying to reconcile the fact that it looks like a giant comedy fork with the fact that it memorialises a mass execution is not easy. The awkwardness that you feel as your brain tries to make sense of the novelty and the profundity is part of what makes encountering these monuments so unique. 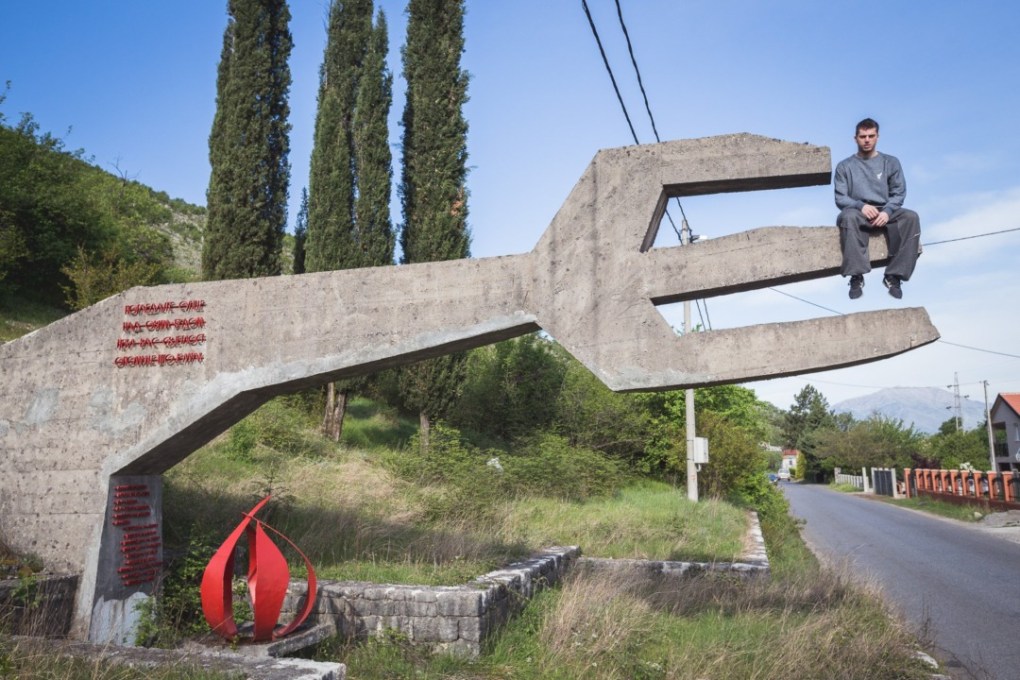 Continuing north, another random edifice interrupted our journey. Inside the car, we had been rapping along to Eminem (one of the few CDs we had with us) and gazing out the window at Montenegrin mountains bathed in glorious sunshine. Suddenly, concrete confusion flashed past us and we each shouted excitedly as Sasa searched for a place to turn around. We parked and ran to investigate. Many monuments are on the roadside, but few more so than this — it was literally in a lay-by. It remains a mystery: there was no-one around to ask, we were in a rush and the internet doesn’t seem to know either. This curious piece of concrete sits somewhere near Frutak if you fancy going to investigate. 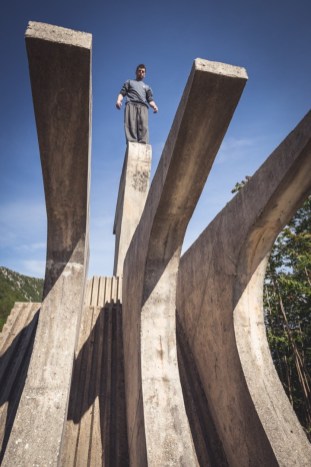 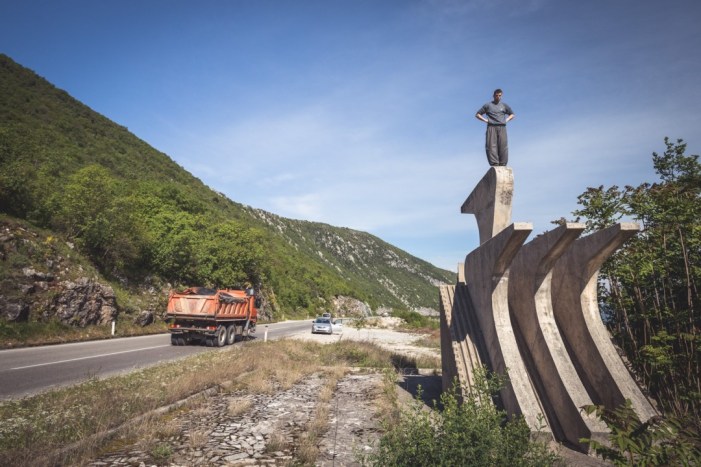 While the police in Serbia happily watched us rotate our car through 360 degrees or climb inside abandoned aeroplanes, the police in Montenegro proved to be a little less friendly. To say that Sasa doesn’t drive fast would be a lie, but he certainly wasn’t being reckless as we buzzed through hills above Niksic. When the police pulled us over, it was clear that this particular stretch of road was a bit of a money-spinner for them. In fairness, we’d had a good run and we figured that the fine wouldn’t be too harsh. What we didn’t account for, however, is that the police would confiscate Sasa’s car documents and send us on an hour-long round trip to pay a fine with no guarantee that we’d be able to find these officers again afterwards to retrieve our papers. 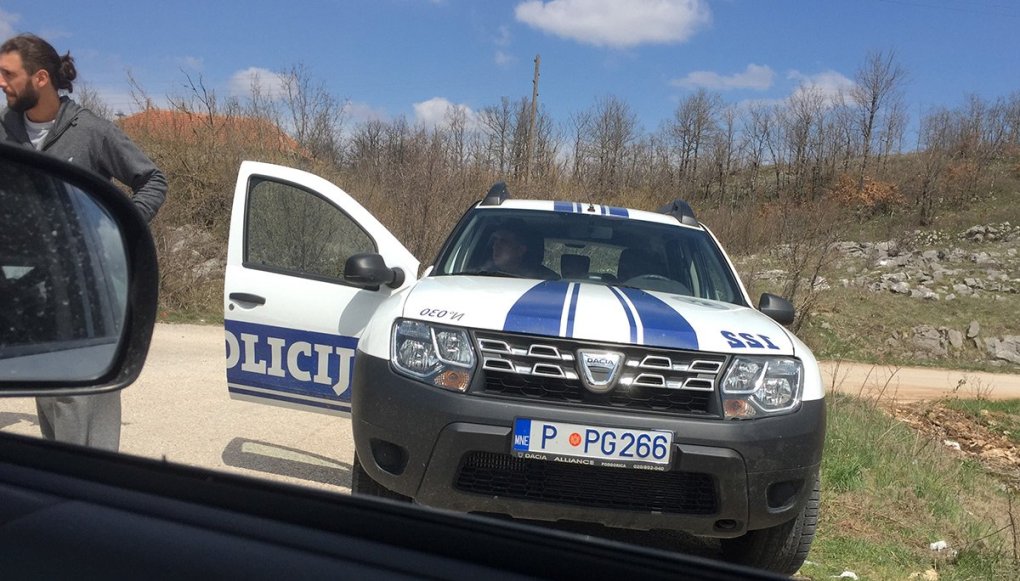 Arguing with police in any country is not much fun. While you can’t risk bribing a police officer in the UK, things can be a little more ambiguous in other parts of the world. In trying to avoid further trouble, it didn’t occur to us to suggest a way of “resolving” the situation, and, looking back, we paid the price for it. The driver of the other car pulled over with us seemed to know how to play the game and continued on his way, while we headed back to the nearest city to find an ATM and a police station. The next time we get stopped for speeding in Montenegro, we’ll make sure that there’s a €20 note folded inside the driving license when we hand it over for inspection.

The monument in Niksic was huge and suitably surreal, but it was a gentle warm-up for what Bosnia and Herzegovina had to offer. This day was still far from over, and even the police messing us around and the border being temporarily closed couldn’t dent our excitement. Check back for part six to discover what is probably one of the greatest concrete structures ever created. 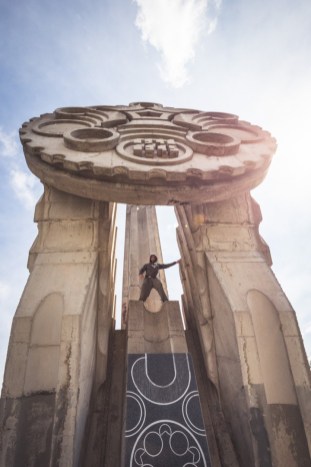 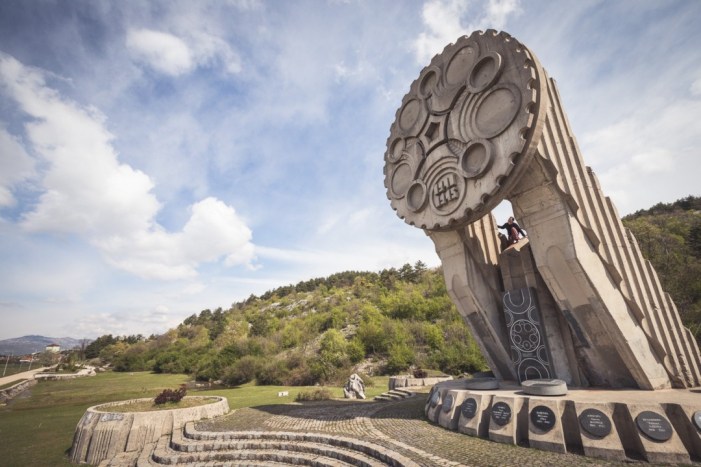