I hear that you hate being asked how you started training. Why is that? And how did you start training?

I just feel the “how” I got into parkour isn’t as relevant as to why I needed it and how it affected my life.

The motivation behind a decision is what’s really interesting, not so much the decision itself. In my case, I needed to be challenged in a very broad sense. I wanted a journey that I would have to push through, in order to come out stronger mentally and physically on the other side. I also felt a need to be ready. Not for anything specific, but just ready, for life, for reality and its many obstacles. Parkour seemed to tick all the boxes.

I also heard that you hate the question “what is parkour?” Why is that?

We define things in order to be able to communicate, and language is meant to structure thought. But as soon as you define something, you put it in a box — it can no longer be anything else outside of that box. As irrelevant as this can be in many cases, it becomes crucial when we start talking about anything artistic or creative such as Parkour.

A truly open mind has no boundaries, but still needs a structure to build upon. It’s like a tree: solidly grounded, yet forever reaching out towards the sky. One must constantly juggle between structure and no structure in order to fully express creativity and spontaneity, and strict definitions have a way of hindering this process.

What is your real name? Who is Thomas Des Bois?

My real name is Thomas Couetdic, which isn’t as sexy.  A friend of mine from Lisses (Romain Moutault) started calling me “Des Bois” years ago because of how I’d love to train in trees and be out in the wild. The name stuck.
Thomas Couetdic

You have a bit of a reputation for being quite intense when you are teaching. Why do you think that is? What is it about your own practice that you want people to understand when they train with you?

In my earlier years, I experienced Parkour in a very intense way, not only because I was training with the top level guys, but also because of how paramount my “mission” was to me. I had a drive to become the best possible version of myself I could be, and for that, I needed to constantly look at myself and the obstacles in a very honest way.

I ask the same from my students, and to many it appears as strictness but it’s nothing more than honestly saying, “OK, if I put aside all my stupid excuses and whining, I have to admit I can overcome this difficulty, right here and right now.”

I guess that over the years, this mentality fused with my idea of what Parkour is. Some people respond very well to this approach, others criticize it. Either way, I know it’s hard on everyone, but it’s not something I can really switch off. Whether I’m training with an experienced friend or playing in the park with my 8-year-old nephew, I will try to put them in a position of weakness and doubt in order to help them overcome it.

To me, Parkour without this is just movement without a soul.

for people in motion
made for casual and wild

What has changed about your training since you started? Physically? Mentally?

I was a driven practitioner. Parkour was in my life, 24/7. It was the converging point of all my thoughts and efforts. Over the years, this imperceptibly turned into stress — I was stacking on my shoulders more and more pressure to become better, to reach higher goals.

It led to some serious moments of doubt and despair, probably a little bit of depression as well. The more I tried, the more it felt like it was all falling apart. It’s a little bit like adding logs to a fire; after a while, you reach a tipping point when you’re no longer feeding the fire and you start smothering it.

I had a mini breakdown. I was very confused and exhausted and over the course of a few days, dropped all that pressure like a big pile of heavy junk. I completely stopped training for a few months, but I was breathing again! And I finally came back to it gradually, with no stress or goals other than having a good time.

Nowadays, I train a lot again — hard sessions sometimes. I have objectives but I only put myself under pressure when it’s helpful, in front of a jump for example. It’s no longer a side effect I endure; it’s a tool I use at will.I could go on about this forever. It’s probably the most important and life changing lesson that Parkour has taught me.

Your approach to training seems to be quite unique. You seem less interested in vaults and flips and more interested in awkward, challenging precision jumps that require real commitment. What is it about this type of challenge that appeals to you so much. Where did this come from?

I embrace discomfort in general. It’s not that I’m masochistic, but in my experience, there is a lot to learn from it. It’s only when we are in a position of weakness that we can experience being strong. No-one is strong sitting in an armchair.

And someone isn’t strong if their strength only applies when they’re well rested and the rail is dry and Mars is properly aligned with Saturn. Again it’s about honesty: can you do the jump despite the discomfort of the present situation?

When you only work in comfortable situations, maybe you’ll still make some technical progress over time, but you’re not really problem-solving. You’re not really engaging in that inner battle and unlocking new levels of self-mastery.

I see uncomfortable challenges as little bundles of strength just waiting to be picked up. That’s why I like the awkward jumps or the snow-covered boulder climbs.

“It’s not about being scared, and it’s not about the adrenaline. In fact, it’s about the opposite of that: working under pressure and keeping a cool mind in the face of danger or chaos.”

What is it about deliberately scaring the shit out of yourself that you find so exciting?

It’s not about being scared, and it’s not about the adrenaline. In fact it’s about the opposite of that: working under pressure and keeping a cool mind in the face of danger or chaos. This might explain most of my life choices: Parkour, climbing, adventure traveling, the army, the firefighters… All these things have that in common.

When I talked before about training to be ready? This is what I’m talking about. If what you’re learning in Parkour only applies to Parkour, you’re doing it wrong.

I’ve heard you say that the mental aspect is missing from many people’s training. Why do you think this is? What are they missing out on?

The first thing newcomers see about Parkour is the spectacular side of it. That’s what draws them in and that is what many interpret it to be about. They want to do the same jump they saw in the video, the one that this other guy did and that looked so cool with that sweet music and fresh edit.

You can’t really film the mental aspect of Parkour — just someone applying it. A video or photo will only show the visual rendering of that mental work, so only people who actively want to train that aspect of Parkour will dig into it more deeply.

Nowadays I’m very disconnected from the Parkour scenes across the world, but when I do occasionally train with new people, I’m often blown away by the massive gap between their high technical abilities, and their weak mental game. It’s not that they can’t — they’re just not interested.

Just go to any popular Parkour spot when it’s raining. Chances are you’ll be training alone. Of course there are some exceptions, and they are the real Parkour athletes in my opinion.

You can make coins disappear and playing cards do impossible things. Is there any overlap between your parkour training and your magic?

Apart from the joy of repeating moves forever until they’re perfect, not really. Parkour is about you and the experience you’re having. Magic is about your spectator and what goes on in their mind, and not so much what’s happening in your hands. 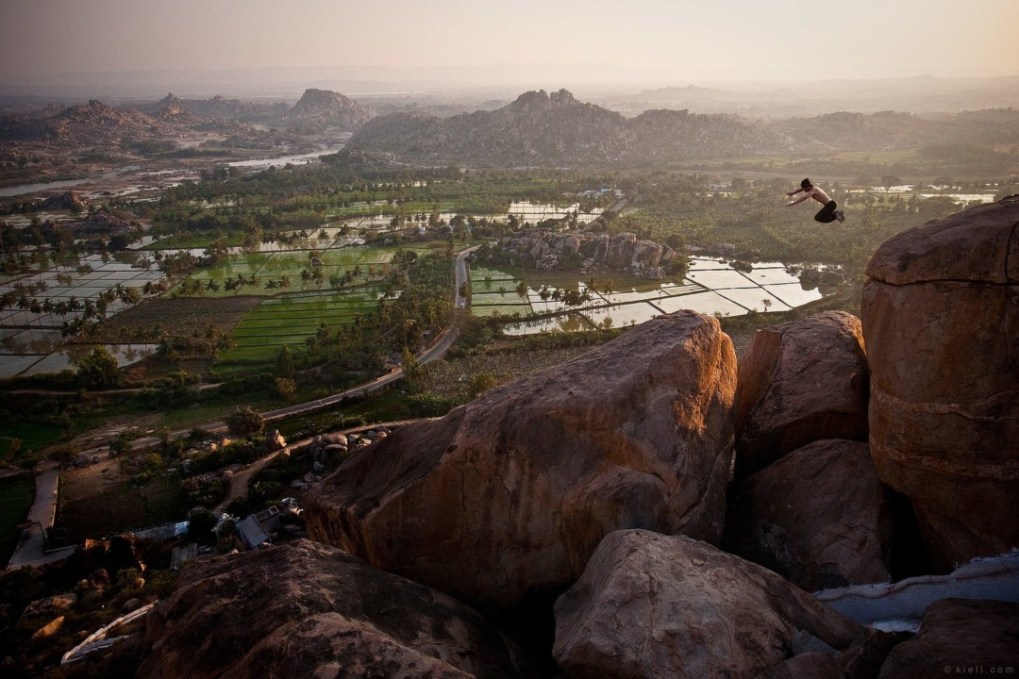 A good friend of yours, Blane, recently became a fireman. Two other practitioners, Rudy and Annty, are also becoming firefighters. Are they all just copying you?

As I said, this is about being in control and strong in the face of a serious situation. It goes hand in hand with Parkour if that’s the way you train, the “old school” way. These people share that mindset, so it’s not surprising that they would get into the same line of work.

Being a firefighter is also about being there for others — being strong to be helpful (ring a bell?). I’m just surprised that there aren’t more Parkour firefighters, actually!

You live in Fontainebleau, arguably the best bouldering destination in the world. How does your climbing training differ from your parkour training? What is the same? Which is better?

It doesn’t really differ. I apply the same mindset to climbing. I challenge myself with high or exposed climbs, unwelcoming weather, etc. I try to avoid using a crashpad and I love barefoot climbing. The two activities often overlap, and sometimes I don’t even know what I’m going to do until I’m in front of a boulder.

On a more practical side, Parkour is often a very useful way of getting down after a climb!

We heard that you like to travel light to the extent that you cut the handle off your toothbrush when you go on adventures. What does minimalism mean to you?

My appreciation for discomfort also applies here. By not having something anymore, I learn to value it, whether it’s a meal, a glass of water, a warm shower, or a complete toothbrush!

I travel very light because that means I have less weight to carry, but also less stuff to worry about: fewer things that can break or that I can lose, less on my mind, and more mind to apply to the present moment.

I’m also minimalist in terms of plans and preparation: I often know where I’m going, but not at all how or when i’ll get there. It’s constant improvisation depending on my mood at a given moment. It’s funny how good we are at making life so complicated, but take away possessions, paperwork and timetables, and you’re left with an incredibly simple yet exciting life where each moment, good or bad, is experienced with exquisite intensity.

We people in Motion are those people who are efficiently moving all the boundaries and are constantly hungry for a new challenge. Physically, mentally… you name it, we’re on it. Same story goes for Skochypstiks. Our DNA is made of this idea and making Skochy Denim was truly challenging, but we truly did RUN for IT!

To me, Parkour without this is just movement without
a soul.