which technique to use and when?

When looking at ways to improve strides, there is no better model to look for than triple jumping. This discipline perfected the hop, step, and jump, so it holds many answers that you might need. The goals of parkour strides sometimes may differ from the ones in the triple jump.

For the triple jump it’s quite simple, cover as much ground as possible in 3 jumps. This means you have to preserve as much velocity as possible from the run up, all throughout three phases. It also means you need to generate as much force as you can in that fraction of a time when your foot is planted.

In parkour however, strides don’t often have the same end goal. We often stride on various tiny surfaces so I would say control and safety are primary goals most of the time, in which case distance becomes relevant only when those goals are reached. 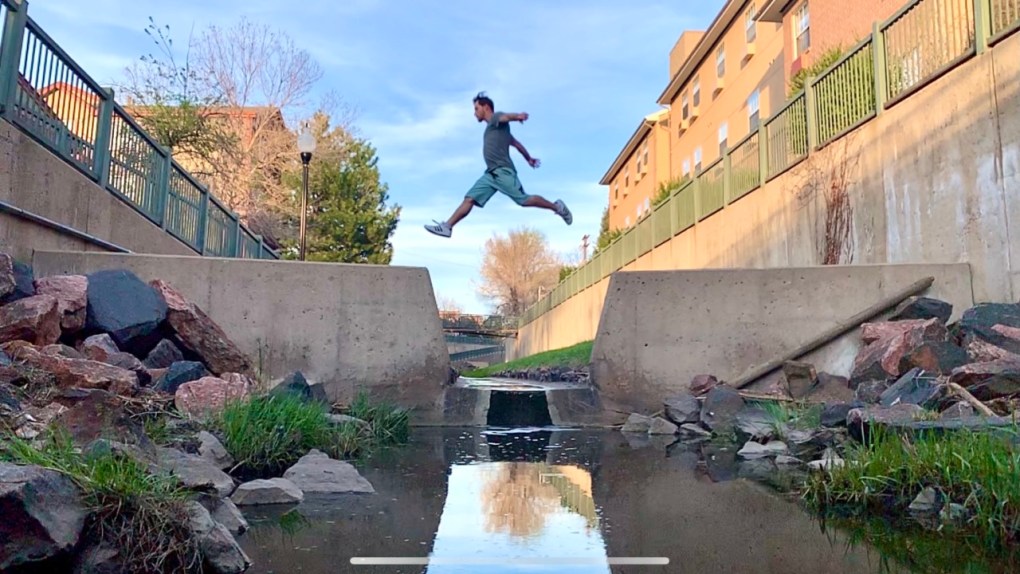 Striding technique varies significantly based on our goal, which then further changes based on the obstacles and surrounding factors, as well as our intention of movement.

To help illustrate this we’ll use two examples with completely different settings, both on extreme ends, and hopefully we will find out how and when to use different technique aspects optimally. We will look at three different factors: the arm swing, the ground contact, and the pre-activation, which are of great importance when it comes to striding in general.

The goal here is jumping for distance. The conditions are ideal, almost like on the track during triple jump event. External factors that can upset you are minimized.

Swinging both arms at the same time in the moment of ground contact instead of a swing where each arm goes the opposite direction is an instantaneous boost of performance for most people once you get accustomed to it. Biomechanical models have shown that this technique is superior to a single arm action, and for parkour this difference is probably even greater. Traceurs have much longer ground contact times on their strides compared to triple jumpers so arm swing can actually “generate more power” for us over this period.

Landing with your feet in dorsiflexion (foot pointing upwards), and hitting the ground with the whole foot at once (flat foot) or slightly heel first is optimal in these conditions in terms of both performance and safety. If you were to land toes first, it would extend your contact duration resulting in much less preserved velocity and in the end smaller jump.
But it’s not just that, by doing so you would need to make contact with the ground a lot sooner than you would otherwise, thus changing the angle at which you generate force, which is causing you to slow down even further (you are literally applying brakes).

Landing toe first when striding is also quite risky as it places calf muscles in a position not well suited for generating power, you’re forcing them to work eccentrically instead of just quasi isometrically, so they are taking a lot of load off of your Achilles tendon (which is not something we want in this scenario) and all that just increases the risk of injury when the forces are high.

Even though this would fall in the ground contact category I wanted to mention it separately. From what I’ve seen in practice, a number of practitioners are landing with their feet loose to a degree, and are placing it as if they were afraid of the ground.
The action of placing the foot needs to be vigorous, and by doing so you’re pre-activating leg muscles. This important action is amongst other things playing its part at regulating active stiffness, it increases muscle force at the time of the contact, and improves timing of muscle activation in relation to ground contact. Take a look at the graph to the right to see its importance.

Example 2. Rails on height (not too apart from each other).

The goal is to traverse them efficiently as possible. The conditions are super tough, and almost all that’s talked about in Example 1. drops (until we become accustomed to this situation).

In this scenario our arms are mainly used for balance rather than force generation. Single arm action now becomes favorable since it provides less change in position of our center of mass. We also have more options considering their position since we’re not considering optimal performance at this point, and that position might just save us in case of fail.

This now becomes debatable as I’m speaking only from experience, but I find that slight plantar flexion (with toes raised) is paramount to control when striding. My reasoning behind it is that by doing so you feel for the ground first, and as soon as the foot touches the bar you can feel if it’s placed in a right position. You will get a very small opening where you can adjust the foot placement a bit which can be of huge importance in this type of situations. The amount of plantar flexion is I guess dependent on the individual and the situation respectively.
The longer contact time that was main issue in Example 1 helps with the stability in this case since we have more time for fine adjustments.

Well pre-activation is still important here, but I would say only at the calf level and it also needs to be tuned down. Movement of the whole leg would differ much more than in Example 1 i.e. the recovering leg (the back leg) would be traveling close to the ground the whole time and the whole striding movement would be initiated primarily from the hips. This arrangement insures much more control during foot placement, since keeping your leg close to the ground and in front of you can be seen as aiming.

Different variables and techniques can be used depending on our goal, obstacles and conditions. This isn’t just related to strides and jumps, but for almost all movement tasks. If our primary concern is performance we can always turn to professional sport event that resembles our activity the most (and adjust for variance). For more technical side we can only make assumptions and guesses based on our biomechanical knowledge, logical reasoning and personal experience. That is until parkour as a whole and science in parkour grows substantially.

WHY ETREFORT IS SHUTTING DOWN

A New Decade of Making Clothes