Adventure is when the Unexpected throws you off the path you planned an on to an unknown end, be it for worse or for better.

The path we had planned lay to the east over hills and plains, fields and dry creeks. But as the third day started to fade the path was blocked. Stretching from left to right as far as we could see was a wall of steep hills. They loomed above and weighed on our heavy legs like a second pack.

The decision was to aim for a crack in the hillface and a hopefully gentler climb to the ridge-top before making camp. We still had two or three days distance to go, and time was not generous. So a hop of the fence and a trek over fields brought us off-road. We made a straight line towards the crack. 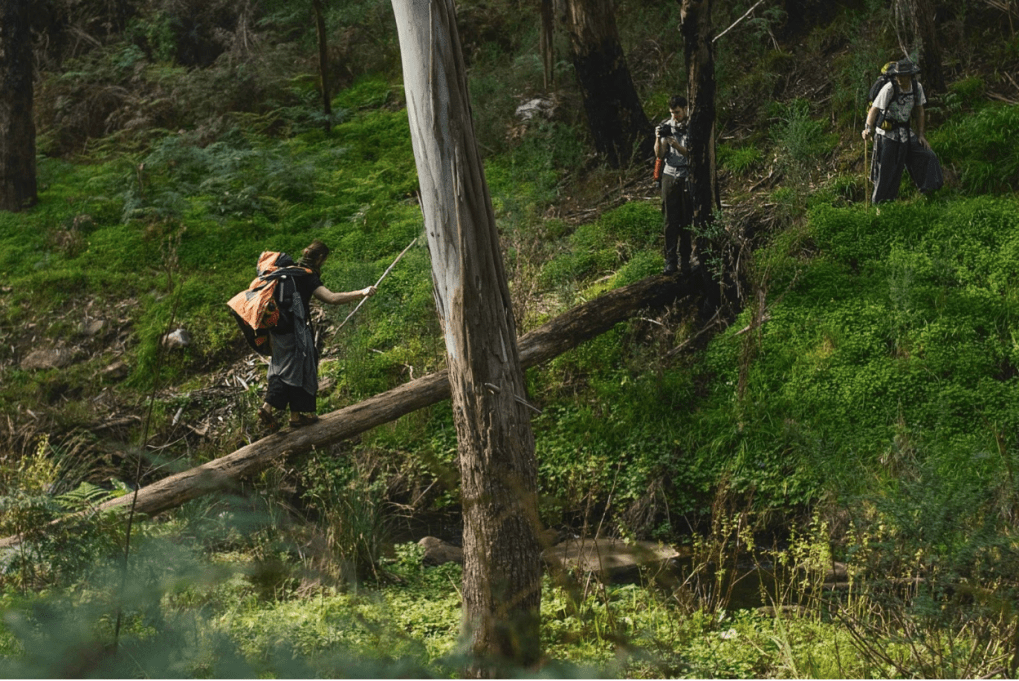 Fences are the the inevitable plague of any Australian who wants to make their own way across the countryside. Even deep in the outback, everything is private property and barbed wire runs back and forth across the ancient land. The culture is of jealous land ownership. The accepted protocol for those who want to go cross country where the roads don´t run is to call ahead and get permission from every land owner on the way. But for we who want to just chase the sky and see where it takes us, the accepted protocol is unacceptable. It was a matter of choosing our battles and running the gauntlet. After all, even in the semi-rural Adelaide Hills Australian farms are huge enough that you might never see another human being! So we hopped another fence.

On a private road we heard the sound of an engine. It grew louder as it rounded the bends and dips of the hillscape. We stopped to look as a white ute (pick up truck to non Australians) topped the rise and rolled down to meet us. The driver pulled up and asked `what are you doing here?´ There was a moment of uncertainty as we tried to decide whether he was more puzzled or angry that we were trespassing on what was probably his land, but we simply answered with the truth.

We were in the middle of a winter hiking trip. From the plains of Adelaide, South Australia´s capital city, we had traversed a cross section of the Mount Lofty Ranges picking up and losing comrades along the route. At the time we were four. Frazer, Joel, Ashlee and I were aiming to continue across whatever obstacle we found to one of the best natural parkour spots in Adelaide´s hinterland. Mannum Waterfalls Reserve by the Murray River. We were three days underway and from this point on there were no favourable roads to our goal. So we had to make our own way over this wall.

`Well´, he told us `you could go that way, but the guy is a bit of a dick and he has a gun. If you go up to the end of the driveway here you´ll reach my brother´s house. He´ll look after you and he might even give you a lift over the hill in the morning.´ He called ahead to warn his brother of the vagabonds on the road.

The end of the driveway was not as close as you might expect. After hiking up and down along the winding hillface for some time the fellowship wanted to rest. So I went ahead to find the promised end. Sure enough I had to climb another long slope before I caught sight of somebody coming to meet me. I called back to the others. I had entered the domain of Priya and George.

Priya and George were to become our good friends. And what better circumstance to begin a friendship with than walking up the driveway in the late afternoon sun with a roadweary party. On the left and right as we approached the house were horses. Saahir, Daz, Fanta, Khan, Dolly, and others stood and stared. The dogs, Miley and Solli ran to escort us. There was a big family here at the end of the driveway.

The property sits in a bypassed corner of the Adelaide Hills. On the slope part way up the hill, it overlooks the township of Harrogate with a wide open view. Fields covered in long grasses stretch far from the house. There is a spring and a dam and plenty of space. Ravines lead through the embace of the hills to hidden valleys. Ancient gum trees tower above, each standing solitary in the paddocks. Its sits at the junction of several microclimates and so the weather changes rapidly. Sometimes violently. But each sunset is a dazzling work of fire painted uniquely across the broad canvas of the Australian sky.

We made camp by the stables. We all used hammock based set ups and the hitching posts were a perfect campsite for us. George used the time to find a cast iron stove and stoke up the fire inside. He cooked us lamb chops under the open air as the dogs ran excitedly about. We weren´t just showed to the stables and left alone so George and Priya could go about their lives. Instead they made an occasion of it, and there was a delight in the absurdity of the occasion. We stayed oustide until the twin fires of the stove and the sky died down.

An evening of lime tarts, wine, laughter and open discussion preceded a moonlit night pierced by the braying of the horses in defiance of the gathering rain clouds. And then after the rain had passed, the morning.

We met Priya who walked us up the hill to the boundary of their property and guided us on the best way forward. `First aim for the radio tower on the highest hill, then head straight down the other side´. Bouyed by the genuineness of our experience we headed on to see what kind of road lay ahead beyond the hills.

The radio tower was the highest point in the area and we stopped to survey the way. To the east and west of the ridge the land fell away. The tower marked a natural border. To the west there were scattered farm houses and the town of Harrogate. The land was green and moist. Roads made way here and there. The landscape was undulating and cut by creekbeds. But away to the east yawned the last plateau of the Adelaide hills. It was flat and open, gently rolling. The farms there were of industrial scale and there were only a handful of houses in sight. Civilisation had ended.

We sauntered our way down and once we had reached the bottom of the hill the gentle downwards slope spurred us on. But as the morning went on our momentum faded and fatigue set in. Field after field was left behind and each fence we crossed marked no discernable progress. There were no people, no animals, no movement. A dip in the earth marked a dried creek and beyond we found ourselves at a rocky outcrop like the battlement of some desert fortress. We stopped to discuss.

We wanted to reach our goal. Nobody wanted to concede defeat. We had only a fraction of our journey still ahead. We knew it was all downhill and easy terrain. But we had a time restriction that gave us only that day and the next to cover at least 40 kilometres. We had little energy left and it was harder to keep moving at that pace. Small injuries were starting to make complaints. It would take a hard march to force our way to Mannum in time. What´s more, there was a road visible from the outcrop. By chance it was the only road we had seen that day and the last one for 20km. The decision was made to call this outcrop the end of our achievement. We found phone reception and called for backup.

The journey didn´t end as we´d hoped. But the ending was an insignificant footnote when held against the opportunites that adventure threw our way. We had discovered places in Adelaide´s back yard that very few do. We made friends with good and genuine people and began professional and personal relationships. George and Priya have helped me grow in many ways through the skills and experiences we´ve shared. And everyone amongst us learned from the expedition.

Adventure presents us with challenges and opportunities, and a skilled adventurer is one who can recognise them and act to the best of the situation. It is an art of adaptability, reacting to the world around and making one´s own course.

So leave the road you have in front of you and find some different way. You will find new challenges that require new skills, and opportunities that were never part of your own life. Unknown ways are waiting.

Much love to George and Priya and all the family for taking us in. Thanks to Joel, Fraz, Ashlee and Harry for building a journey to remember and to Joel´s mum for saving us from our folly