Going into this challenge the idea was to stay on one bar while balancing for 1 hour. Straight forward in nature and a simple idea, the task ahead didn’t initially seem daunting in size. It seemed relatively within reach. Normally a sense of anxiety sets in as the time approaches when attempting new challenges. This time, however, there seemed to be a lack of anxiety, a sense of calm. Whether it was due to certain confidence with the ability/skill level that has been attained over the past decade of training or just a lack of thought or foresight going into the challenge, who knows? My thoughts going into the challenge were fairly simple; What shoes would be most comfortable? *Since I’ll be standing around precariously for an hour I might as well be comfortable. Have I gone to the bathroom beforehand? *It would really suck to be up for 5 minutes and need to pee. What position was I going to concentrate on for the hour? I wanted to explore the depth of motion and fatigue in one given position for the entire time. The position I decided on was going to be standing linearly on the bar with the bar crossing the length of my foot from toe to heel. This was in order to see body position prefernece as well as note any muscular imbalances from one side to the other. What should I listen to? This last one was very thought provoking for a number of reasons, but most importantly, what was my goal in this challenge and how can I use the ambient noise to help clarify my thoughts? 5. Consequence? What was my consequence going to be if I fell during the challenge? I decided that 10 squats while balancing were going to make the overall challenge harder and therefore an adequate consequence for falling. .

After making my choices the next step was to decide If I was going to keep track of time or to set a timer, easy choice on the mental aspect, I chose to set a timer to be able to focus on the task. Once we had started my thoughts started coming in sporadically, the first thing to come to mind was “ how long has it been?” The decision to set the timer had already awnserd this question. It wasn’t over yet so keep going. My thoughts quickly adjusted past this thought and moved onto the following areas in and in this order .

“What should I focus on as a source of timekeeping?”

When the challenge began I was almost overly obsessed with how much time had passed. This became a focus of thought that would need to be quelled before I could fully experience the challenge. I decided that I would focus on my music (my choice for the challenge was DJ Rude) And then about how long each song was and how many songs I would potentially listen to in one hour. The number I settled on was roughly 20 songs in one hour. This gave me a sense of time to reference back to when my mind went back to “How long have I been here?” 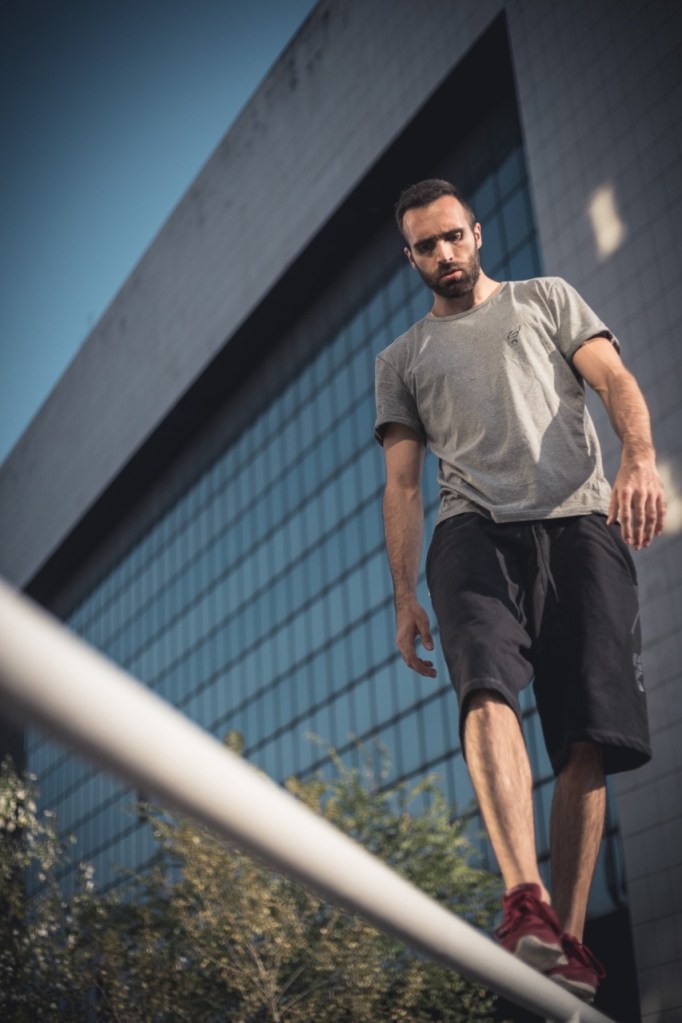 “What muscles am I using?”

How is the muscular engagement connected to how I am staying in place? This thought led to an internal dialogue of exactly how much muscle is actually needed to stay in balance on this bar that is less than two inches in diameter? Also, highlighting how over excursion can fatigue the stabilizers and ultimately make you work twice as hard over time in a situation like this..

“Where is my weight being distributed?”

An interesting thought for sure but a necessary one undoubtedly. This question helped to highlight what portion of my foot had the most weight, but also allowed the exploration of the differences within the alotted space on the bottom of the foot for weight distribution. How do all the different balance points on the foot affect the rest of the balance within the body and where is the most effective location within my own foot in relation to how my body felt?

“How much knee bend is really needed while balancing for this much time?”

Starting out, I had a fairly large bend in my knee (about a ¾ bend) and found that my legs had become tired quickly making it imperative for switching sides often. Once this was noticed the object was to reduce the angle as much as necessary to prevent over fatigue to the quadriceps. Finding that as long as there is a slight bend in the knee to compensate for adequate re-alignment of balance you dont have to sink very low at all. .

“Did I forget to breath?”

This was a huge epiphany for me personally. I found that depending on where my focus was I would slow down or interrupt my breathing almost entirely. Once this was addressed and my breathing became more regular my balance obviously got much better. Focusing on smooth even breaths calmed the mind which in turn calmed the body. .

“How much should I be gripping with my toes?”

My feet began to fatigue around the midfoot area around the fourth or fifth song, which became a point of focus. To understand exactly how much/little is needed to grip the bar effectively became captivating. How much could I relax before it affected my overall performance in this matter?

Somewhere around song 10, I became increasingly distracted with everything going on around me. Shiny things and movement are the downfalls of the ADHD human…that and anything fuzzy. But during this little episode of ‘The Evan show’ as I like to call it I had a profound realization of the importance of why I am being distracted by movement. On the base level of human evolution, this trait (curse) could be seen as a gift in disguise. Being drawn to notice movement and an overwhelming need to identify what is moving and why it’s moving is an inherent trait within the animal kingdom of self-preservation. If you don’t notice what is happening around you, you’re more likely to become dinner for something else. But why would that be helpful while balancing on a bar? The conclusion that was made was that this inherent desire to be situationally aware is partially to blame for faster reflex engagement and an ability to adapt quickly to change within one’s body awareness.

On two very distinct occasions, I found myself in a state of calm that was surprising, to say the least. These states of tranquility were almost a melding of body and mind in a harmonious sense of self. What was it that made this possible? Did I stumble across an ancient form of meditation? Not really, but at the same time yes. By focusing internally on body mechanics and breathing I was re-centering into a ‘flow state’. A state of being completely in the moment where my surroundings were melting away and I was in a state one with myself. These two moments became very powerful and long-lasting even hours after the challenge had been completed. By focusing on a simple, yet difficult task I was able to rebalance my mind while literally focusing on my physical balance.

Somewhere along the journey of balancing for this much time, minutes seemed to melt away and the focus became maintaining of the mechanical structure that I was building within this challenge. The first time I fell it was a sense of snapping back to reality.

Without thinking I checked my timer that was displayed on my watch, 19:43 was the time remaining. In the second it took to look at my watch the epiphany set in that 40 minutes had flown by and I was well beyond what I thought I was at by this point in my song tracking. I got back on my bar and stood perpendicularly to the bar and performed my 10 rail squats while maintaining my balance. The squats felt effortless my balance had been well honed by this point. I began to balance again.

My thoughts and actions at this point were an amalgamation. As I switched from foot to foot and observed the change in balance and I began to think about the smallest details in my thoughts before the challenge began. What was I focused on? What am I focused on now? How can I use this experience to help my students? As I began to think outward my balance became intrinsic. Before I knew it, I was falling again, I recaptured my balance and tried to stand up before falling off for the second time. Without hesitation, I looked at my watch out of habit, 4:19 left! Somehow, 15 minutes evaporated into what seemed like thin air. I jumped back up and did another seemingly effortless 10 squats on the bar. The last 4 minutes went by incredibly fast as if it was only a minute. I came down and began to think about my experience and the takeaways that were prevalent. Before I started, this was just another challenge. But now that it was over and an hour had seemingly vanished I had a new outlook. I was a new person, the doubts and concerns I had before were either gone or weren’t valid excuses for inhibiting my training anymore.

By making the conscious decision to take a new challenge I am forcing myself to be better than I was yesterday. I now know that what I once thought was an insane challenge years ago is completely attainable through practice and diligence. The amount of time it takes to commit to an idea is an instant, but the effort to make that idea a reality depends on the deliberate effort that you put forth. I would highly recommend setting challenges like this for yourself. Making sure your goals are realistic and placing yourself in a position of positive vulnerability through new experiences is how we grow as individuals and keeps us on the path of exploration. Go out and try something you’re not sure you’re ready for but have been thinking about. But, as always, train smart and train well to set yourself up for success.

FOR PEOPLE IN MOTION

The idea itself came naturally, since most of our team began training parkour, many years ago. We simply couldn’t find the perfect outfit for all the jumps and rolls, so we created it. 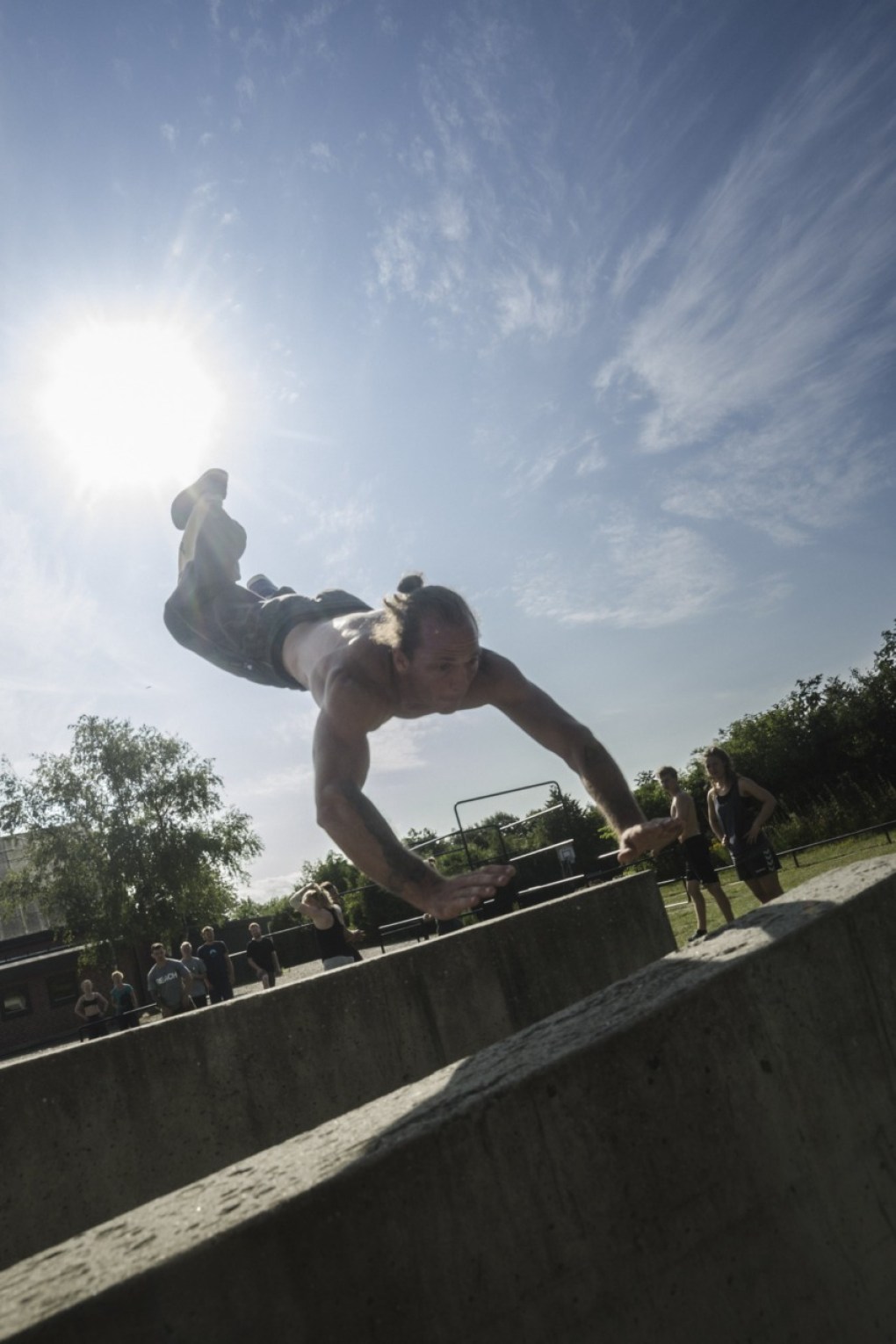