We arrived at Knin, our final monument. For now.

Like Košute, Knin has been toppled. Unlike Košute — where the hatred hung heavy in the air — Knin is quietly disappearing into the forest, nature engulfing its concrete fins. Very slowly, the landscape is concealing that which once dominated it. 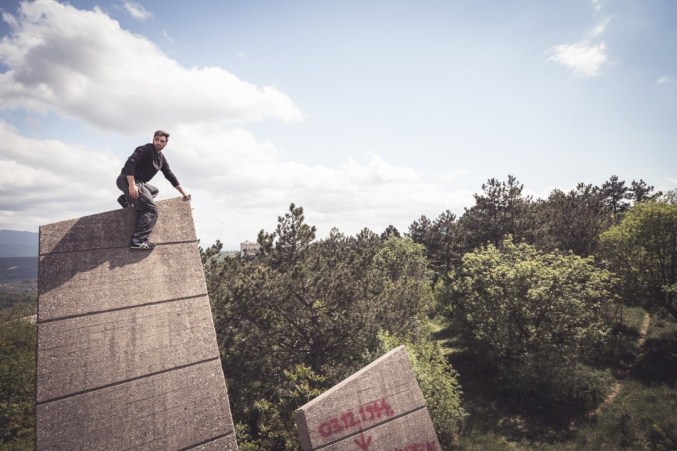 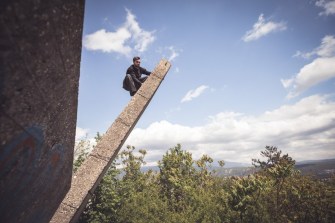 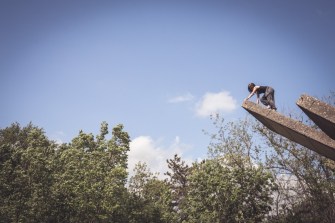 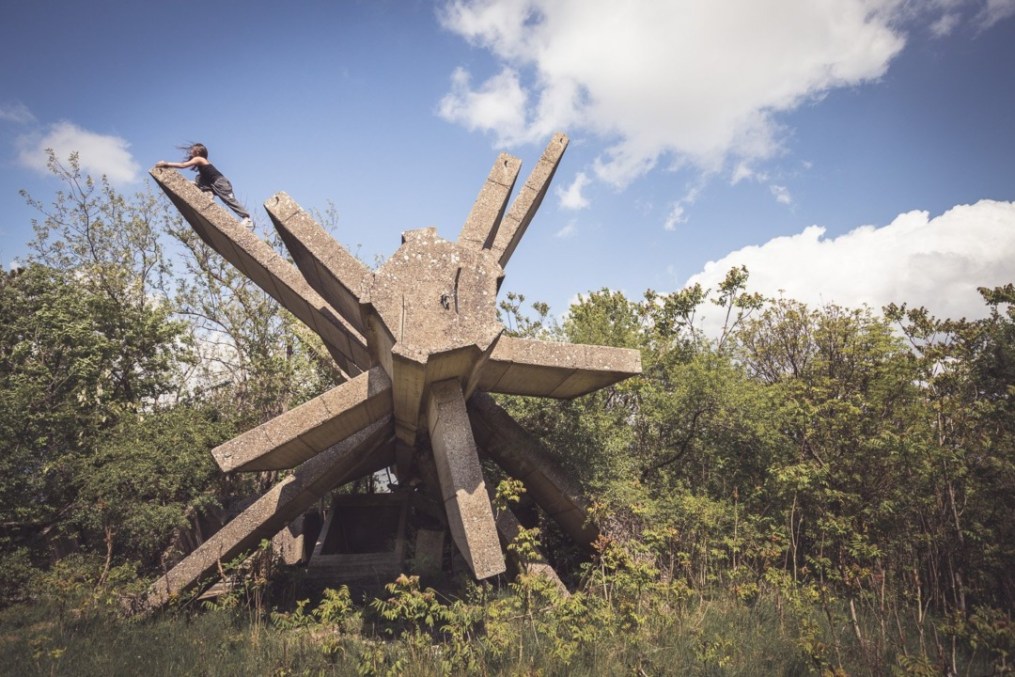 In contrast to the grey skies at Košute, Knin brought brutally bright sunshine, lightening our mood, helped also by a few new additions to our team collected in Zadar that morning. Jovan, a traceur from Belgrade, replaced Kosta, and we were joined also by Marta and Nataša, two dancers from Zadarski Plesni Ansambl.

With the five of us wedged into Saša’s hatchback, we drove the short journey from Zadar and, parking close to Knin’s 9th-century fortress, wandered up the track into the forest above the nearby city. Commemorating the liberation of Knin from its Nazi occupiers towards the end of the Second World War, Monument to the Knin Liberators now sits abandoned, on its side, no longer 25 metres tall, and no longer singularising the horizon — another victim of the nationalist animosities that played out during the wars of the 1990s.

Knin was twice a capital: first as the centre of the medieval Kingdom of Croatia, and then as the capital of the self-proclaimed Republic of Serbian Krajina from 1991 to 1995. It was the fall of this republic that saw any remaining Serbs flee from Croatia into Serbia, and this included Saša, then aged only six, and his family. Like many other Serbs, they were fleeing “home” to a country that they had never visited, and, until a few years beforehand, didn’t exist. Saša and his mother escaped in the middle of the night in the back of a truck, unsure of where they were going and with no idea of what they would do when they arrived. In 2008, the family returned to the countryside above Zadar, slowly renovating their old home, and gradually recovering their fields and crops. Traces of the war still remain, such as the bulletholes in some of the neighbours’ houses.

Now, 23 years after his family fled, Saša was standing on the wreck of a monument at Knin. “I’m here with completely different ideas,” he told me. “Positive thoughts, with people from all around, with Serbs and Croats, with friends. And with people in motion who all share the same values. Standing here means a lot, not just to me, but to my family, for this community, and I hope for future generations.”

With this in our minds, the final monument of the tour was a moment to reflect upon what our adventures represented. The bodies of these athletes brought a new layer of meaning to these intensely complex structures, and the traceurs of Serbia and Croatia form the two most important parkour communities in the world. Here at Knin, we were dancing and jumping together: one traceur from Serbia, another from Croatia but with a Serbian family history, and two Croatian dancers, each with their own personal experiences of the region’s bullet-ridden past. Despite its brutal history, the border between these two communities is not a division, but an opportunity for discovery and adventure. Parkour is transnational, and its athletes are global citizens who share and celebrate diversity, rather than allowing historic differences to maintain a sense of fear and otherness. Parkour trivialises nationalism and, through its progressive politics, makes fascism seem absurd. 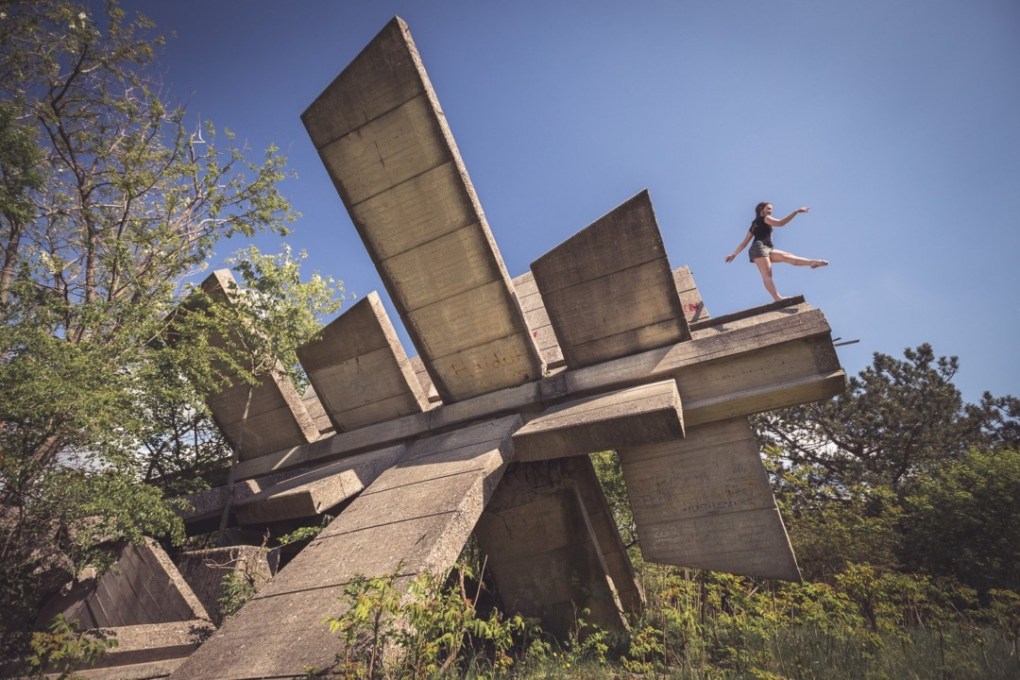 The athletes that I work with are collaborators, not just subjects. They are playing out an idealised vision of themselves, and through that, a new understanding of the relationship with their historical, political, cultural and social context. The monuments are a part of their past, but, as the graffiti on one of the monuments explains, it’s difficult to look to the future with eyes that are full of history. Instead, these exploring bodies bring the transnational, progressive culture of parkour to the monuments, not to overlook their historicity, but to express a view that, with each generation, there is the possibility to shake off the weight of the past.

The monuments are a mass of contradictions — loved, hated, forgotten, celebrated, maintained, policed, graffitied, destroyed, illuminated, lost, abandoned, utopian, optimistic, failed — and each of these contradictions has a physical manifestation. Monuments at their inception are designed to inspire awe, to imprint an ideology onto a culture through their grandiosity, and the Yugoslav spomenici are the architectonic apotheosis. They were always intended to be otherworldly, and while clickbait proliferates, complaining about a superficial engagement with them does a disservice to the designers and architects that conceived these remarkable structures. These were artists intent on creating something that the world had never seen before in order to celebrate the forging of a country that the world will never see again. 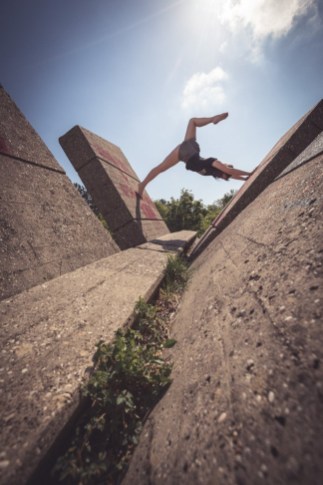 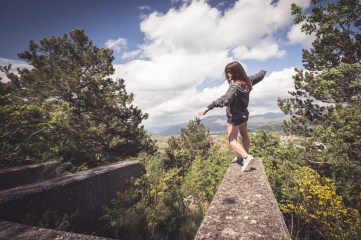 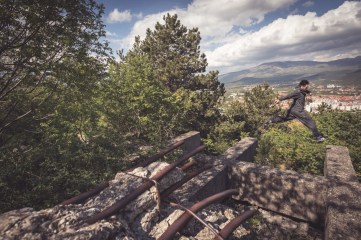 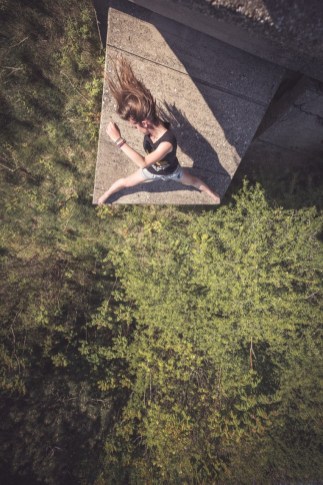 Unseen, they fester inside their Balkan bubble, trapped by the politics of the past. With the eyes of the internet, they emerge and acquire a new currency — as seen at the MoMA exhibition in New York that has opened this month — allowing the world to exert a new pressure on the nationalisms and fascisms that are a constant threat to the region. Some complain about the lack of depth in blogs and Instagram posts, but knowledge is a process rather than a puncture; understanding is triggered by points of interest that then evolves into an appreciation of the nuance, inaccuracies and complexities that have been encountered along the way.

At Knin, we were a multinational, multi-ethnic collective seeking to create something beautiful and progressive out of something violent and closed off. The fifteenth and final monument of our trip brought the poise and energy of our two dancers to the project, their grace a stark contrast to the history and concrete that is so blunt and unforgiving.

Our journey came to a close where the civil war ended 23 years ago. For a week, we were Serbs, Croats, Macedonians, Montenegrins, Bosnians and a Brit, seeking the same goal: to try and create the opposite of war, whatever that was. Perhaps it’s just a pause. Be ready for more stories of these concrete and steel giants scattered across a land that no longer exists. Skochypstiks is a clothing brand based in Serbia. We see borders as opportunities for discovery and adventure, not points of division.