Posted on December 10, 2017July 19, 2022 by Andy Day
In the words of Monty Python, “Finland, Finland, Finland”. This country probably doesn’t spring to mind when you think of parkour, given that it has almost as many lakes as it does people. (Ok, it has 188,000 lakes and 5.5 million people, but you have to admit, that’s a LOT of lakes.) Scandinavia’s contribution to parkour is immense and Finland has been at its heart since its earliest days. I used to chat to Perttu, aka Mr Spidet (no, that’s not a typo), on IRC in 2003, around about the time that he came to the UK to attend PK4. Since then, I’ve been lucky enough to visit Finland on five occasions. The Finns have a reputation (within Scandinavia, at least) for being incredibly organised and they were the first to establish a national parkour organisation with elected board members and government funding. In Jyvaskyla, a city of just 135,000 people, Parkour Akatemia teaches more than 80 classes every week. Last year I had the honour of attending the Supreme Parkour Armageddon, an annual training event held in the depths of Finnish winter, where there’s only about 6 hours of daylight and typically a couple of feet of snow underfoot. Some of the training takes place outdoors, and the locals have developed some improvised techniques to make the most of the conditions. The ice demands careful foot placements but it also offers the opportunity to slide. What’s more, the snow can add a little bit of cushioning and extra stability to landings, meaning that flips that look death-defying can actually be relatively safe. If you know what you’re doing. This year, Sasa returns to Armageddon with a massive pile of Skochy clothing. The Motion Pants make for excellent winter training, especially because they’re so baggy that it’s possible to fit at least one pair of additional tracks bottoms underneath. And in Finland, if you’re not wearing at least two pairs of trousers, you’re an idiot. It’s really, really cold. So we’ll see you at The Most Ancient Supreme Parkour Armageddon Folklore: The Epic of Endless Valour And The Forging of Sun and Moon, right? I mean, where else can you attend a parkour training event complete with snow, ice, sauna tents and a hottub? 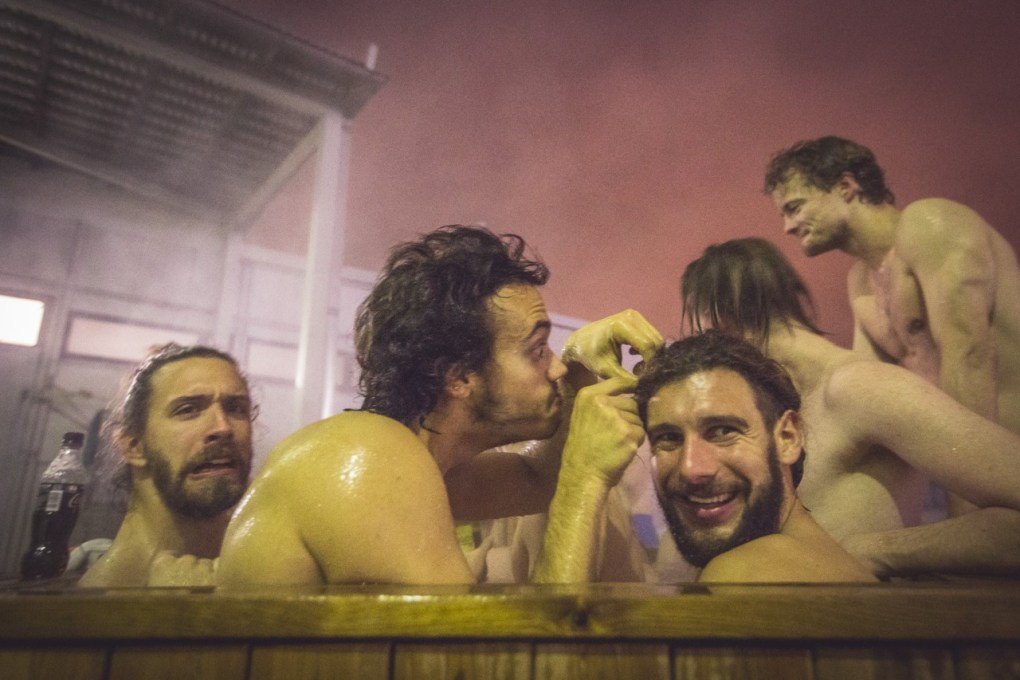